Whooo, I’m going to Barbados! In a 1970s tune, an unlikely Captain Wilcock welcomed aboard Coconut Airways Flight 371; back to the palm trees…in the sunny Caribbean sea, the refrain then continued. One of those ditties that smacks so much of the happy tropics. Indeed, life in Barbados runs quietly: the island has one of the most prosperous economies in the region and a political and social stability to make many other Caribbean countries envious.

Barbados emerges from the sea 160 km east of the island arc formed by the Lesser Antilles, where the Caribbean ends and the Atlantic begins. Unlike most of its Caribbean sisters, it is an almost entirely flat, coral island. The eastern coast is a long terrace overlooking the ocean. There is no land between here and Africa, and the waves, after a run of thousands of miles, crash majestically on the shoreline, crumbling cliffs and shaping magnificent, often deserted beaches. To evoke this landscape a single name: Bathsheba, the realm of surfers, for it is here that the best waves in the Caribbean are formed. 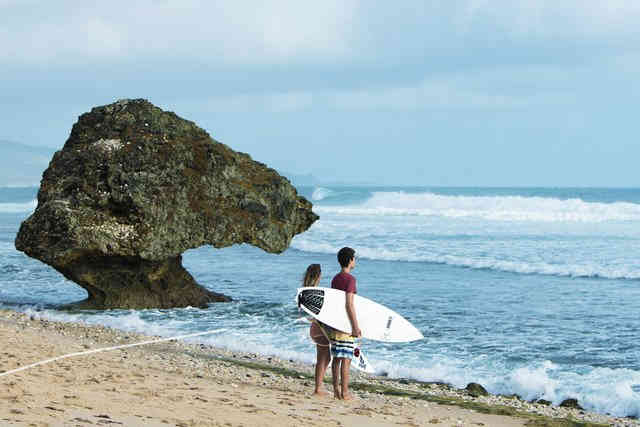 Along the narrow streets that climb the hills bordering the shoreline sprout here and there small wooden houses with gaudy facades, carvings on the porches and hollow plinths to let the air through; in places where the vegetation is a little less exuberant, wild, almost poignant panoramic overlooks open up. Few tourists on the Atlantic side of Barbados; here one comes just to see the spectacle and then off to the other side. Opposite side, opposite scenario: the sea met the reef before coming lapping, this time with a gentle wave, at beaches full of tourists lying in the sun. The fine white sand like talcum powder, the sea in a thousand shades of turquoise, and the fiery sunsets are the tropical vacation ingredients that this side of the island does not miss. However, it is all peppered with excessive urbanization of the coast, which has left very few spaces free of concrete. An unbroken line of many-star hotels, flashy residences and billion-dollar villas, peeking out behind guarded entrances, hides the view of the sea from those who travel along the coastal road. In return, however, tourists can have everything at their fingertips, excellent services, designer stores, sports centers and restaurants where, especially in the evenings, a strict dress code applies. The little England of the Caribbean, that’s what they call Barbados. But it should not be trusted too much. The Bajan lifestyle is very un-British and the atmosphere is decidedly Afro-Caribbean. True, the British crown ruled these lands for three hundred consecutive years, and some evidence of its cumbersome presence had to be left behind. In downtown Bridgetown, for example, there is a small town within a town that has recently earned recognition from UNESCO as a World Heritage Site: Historic Bridgetown and its Garrison. We are talking about an area that includes the old town core, its historic buildings and tower dating back to the 17th century, and the old military garrison, complete with cannons pointed out to sea. British pride spills out of every pore. 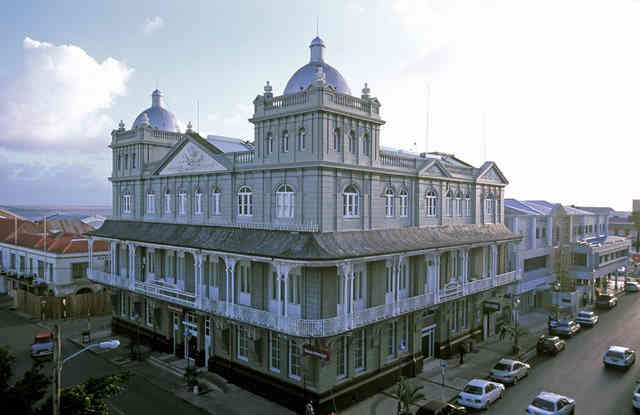 Barbados was the Atlantic outpost of a colonial empire that extended from the Caribbean possessions, the West Indies, to the American colonies, and then expanded with the annexation of many Asian lands. British ships effortlessly took possession of the island, which had been ignored, perhaps because of its geographic location, by Portuguese explorers; a few decades later that sun-kissed, mountainless territory was completely carpeted with cane fields and dotted with hundreds of mills. Thanks to sugar and an army of slaves dragged here in chains by English merchants Barbados became, between the seventeenth and nineteenth centuries, one of the most powerful islands in the Caribbean. Keeping the connections to Bristol was the thriving port of Speightstown; today this tropical-looking, sleepy-looking town remembers almost nothing of its rich past, but it is perhaps one of the most pleasant places on the whole island. When the golden age ended with the abolition of slavery, Barbados never stopped producing sugar. Nor did it ever stop producing its rum, considered by many connoisseurs to be the best in the world. A tour of the distilleries is, as they say, a must. Starting in the hills of St. Nicholas Abbey, a plantation still in operation that uses traditional methods to produce small quantities of fine Caribbean rum. The perfectly restored manor house dating from 1658, with its original furnishings and magnificent gardens, is an enchanted place, a world unto itself that makes one forget the bleak pages of history associated with the colonial era. The tour of Barbados distilleries ends triumphantly in the still rooms of Mount Gay, a company with a history of three hundred plus years that produces rum exported all over the world. It is one of the most popular labels, even in Barbados, where a lot of rum is consumed. But it is not the only one; to realize how wide the choice is, just walk into a rum shop. Rum shops are establishments somewhere between a bar and a village grocery store that fall into two categories, rustic or very rustic; here there is always someone having a drink, chatting and playing dominoes with friends or watching a cricket match on TV. The rum shop is at least as much an institution on the island of Barbados as the rum is. But don’t come here and ask for a rum punch, with straw and colored parasol. That’s West Coast stuff.